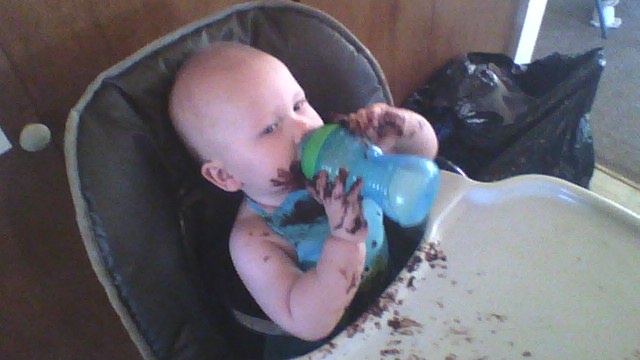 Yesterday was the first birthday of my namesake. He’s getting so big, so quickly. I love my babies. It was a fun day even if he didn’t smash his face into his cake. I plan on uploading videos to youtube of him attempting unwrapping presents and eating cake.

Every week brings something new. He’s learning to walk, learning to talk, and getting the hang of everything. It’s still such a shock to me. The difference between having a son and a daughter is just so striking. My daughter becomes more emotionally dependent as she gets older. My son is very emotionally dependent now. He gives hugs and cuddles readily, whereas my daughter was very independent as a baby. He’ll become more independent and less emotionally attached as he gets older. I’m going to have to cherish this time. It’s going to be short lived.

I still can’t believe he’s already a year old. I still can’t believe my booger daughter said “At least you admit it” as a response to me exclaiming that “I’m fat”. Life will always move at light-speed, even when you want a ‘pause’ button more than anything. Focus on the good in life. It’s always there to reassure. To comfort. Love is always there.