Most of my life, I’ve either worked some stupid “McJob” or behind a desk. I’ve never had what you’d deem a real gritty job before. Until now. Now I come home every morning covered in carbon dust, coolant, and grease. It’s insane. My arms are sore every day, and are getting… Gruesome.

I work in a “cell” that consists of a grinder station, six-axis FANUC robotic manipulator, and dual-spindle FANUC CNC lathe. The grinder does exactly what the term I used implies, it grinds the raw material down to size. The manipulator takes the properly sized material and loads it onto the lathe chuck, which then uses tooling to shape the material into the finished product. The manipulator then sends the finished piece on down to me, where it’s gauged for accuracy and I can make corrections near the end of the line when necessary. The cell produces about a hundred pieces an hour. It’s overly complex for what’s actually happening, and has a tendency to reflect that in what can (and does) go wrong. I’ve noticed two tandem PLC’s, one to direct the manipulator and another that apparently controls the lathe. The cell used to consist of two manipulators, two lathes, and four spindles. It has since been found that it’s a freaking mess for just one person to handle with just one series running. I think I’d die if both were ever running cooperatively. 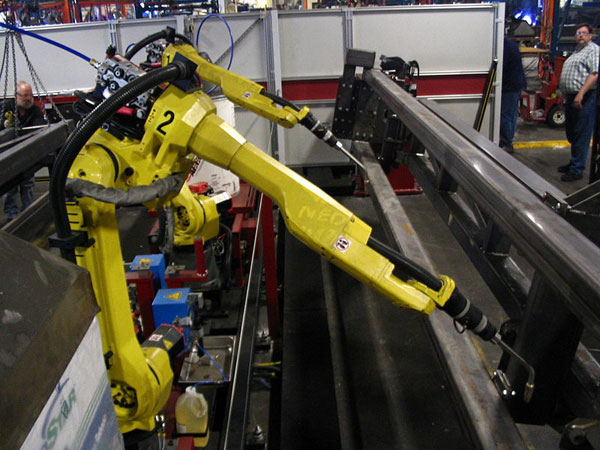 These manipulators are rigged for welding, but the one I use is a six axis as well, just fitted with dual grippers. By the way- cleaning a lathe’s coolant system is not fun. It’s disgusting. It smells, probably harbors disease, and will probably cause me to get alzheimers early in life due to exposure to high levels of aluminium dust.

Well, that’s pretty much it. That’s what I’ve been up to since starting this gig. It’s actually not that bad, when you get past the quirks. I’m still getting used to people saying “fuck” more often than they say “the”. I’m also still getting used to the whole “manufacture culture” that seems to surround it. Like the fact that I’m of the 3% of non-smokers at this place. In any case, it’ll do, and I’m learning many new things.