First of all, I don’t agree with the whole bullshit “You have to be an anti-semite to not side with Israel” argument. If you’re pulling that out of your ass, you can go die in a fire right now. If you’re of the open-minded sort, please do read on.

The Jewish population in the Israel/Palestine area, before 1918, was roughly 10% of the population of the entire area. In that period, Jews suffered a great deal at the hands of anti-semites. They began migrating to what was then called Palestine. By the 50’s, Israel (as it was called after the UN partition plan), housed 7% of the Jewish population.

First of all, the ADL wants you to believe nothing other than everyone Jewish is entitled to settle in Israel. This, to me, is ultimate irony. People speak now about the ousting of Native Americans from their land as being brutish and evil. They like to think we’ve advanced so much that it could never happen again. Yet those same assholes are the biggest proponents of Palestinians being ousted from their homes. Yes, we’ve come such a long way that we’ve turned greed into a religious debate. If you ask me, the obliteration of Palestine and it’s people, as well as the fight against Iran equates to nothing more than a show of power and grab at money. I’m not saying Jewish people are greedy, I’m saying everyone is greedy. It’s time to face facts- there are no good reasons to give long-time residents the boot. 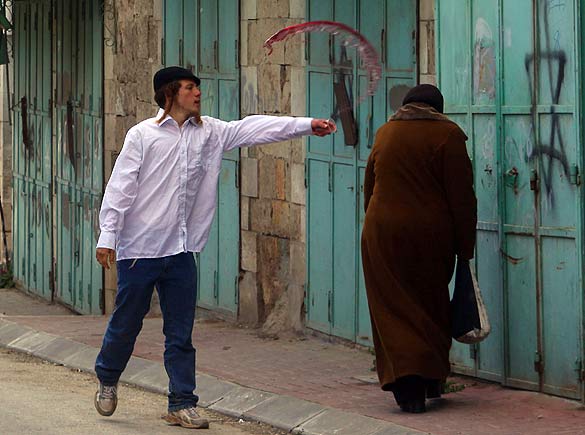 When early settlers felt encroached upon by the British, they hid in the woods and shot at the redcoats. Arabs now have rockets to send messages. A far cry from the bombs Israel drops on them, though. So just soak in the picture above for a moment. Think about what you’d feel if that were a white settler throwing beer at a Native American.

To be honest, you’re probably an asshat no matter what, and still would smile while pissing on the grave of the Native American- or in this case, Native Israeli. Oh well. I tried.

Maybe if you watch this and think really hard about it. I mean real hard. Maybe, just maybe you’ll get passed the bullshit and propaganda, enough to see what’s really been going on.